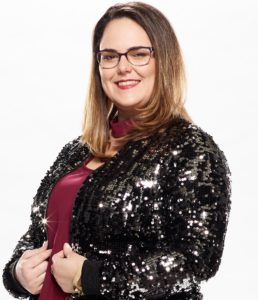 Kim Cherry and her family moved to Bluewater Bay in 1998, Cherry joined the elementary school choir and sang in the choir at Ruckel Middle School. She began playing the saxophone before eventually joining Niceville High School’s choir and marching band.  Music is in Cherry’s blood. Her dad sang in the glee club at Purdue University, her mother was in a top 40 band and her brother sings opera in Boston.

After Kim graduated from high school in 2007, she studied saxophone and music education at the Berklee College of Music in Boston, where she still lives. When she joined a band shortly after graduating college, she discovered that singing was her true calling. Kim is now a part of a cover band called Legends of Summer that performs in New England.

But Cherry’s singing career blossomed on national television this year for Season 16 of NBC’s The Voice.

During blind auditions of the TV show “The Voice”, the former Niceville resident sang “Scrubs” by TLC and wooed the four celebrity judges. Kelly Clarkson and Blake Shelton both turned their chairs and Kim went on to select to join Team Blake. Kim had her second appearance on April 1st as she battled with Kendra Checketts for a spot on the show. They both preformed phenomenally, however, Kim won the round and guaranteed her spot for the next round with The Voice.

Missed the performance? Check them out below! And don’t forget to download the app to VOTE for Kim Cherry!

HOW TO VOTE FOR KIM CHERRY ON THE VOICE: TUTORIAL